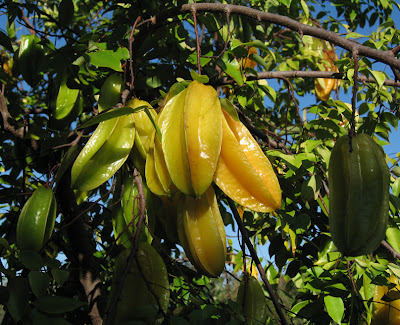 The California Rare Fruit Growers web site says, the Carambola can tolerate temperatures as low as 27° F for short periods of time. Well, mine lives up to its sub-tropical categorization: Despite several nights of 40 degrees F temperature, my carambola trees are still happy, and producing their second crop. The fruits are getting sweeter by the day, ripening on the tree. There is some cold damage (not easily seen in this photo) where the fruit's skin has turned brown, but the inside's still tasty!

Here in Central Florida, my carambola trees are evergreen.

The carambola fruit, i.e. Star Fruit, is crunchy like an apple, yet juicy and sweet (although some cultivars are not sweet, and are cooked . When cut, its cross section resembles a 5 (sometimes 6) pointed star. One thing I like about the skin of the carambola, is that it is naturally waxy, making it quite easy to use a soap and water solution to clean any black sooty mold that arises.

One final thing to mention: if you see small pinhole markings on the fruit, it may be caused by stink bug's piercing-sucking mouth parts. The fruit should not have anything wrong with it, but if you see any small area rotting, just discard it and enjoy the rest.

More information on carambolas can be found here 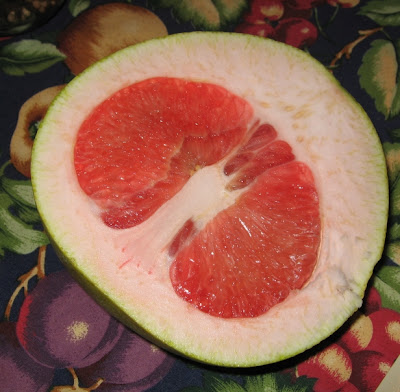 Just some more photos to help illustrate how the inside of my pink pummelo looks like. 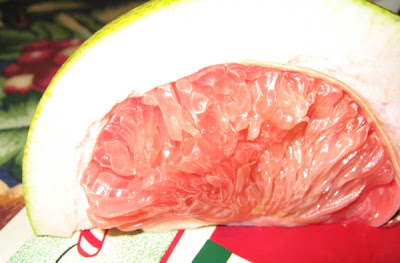 Notice the thick rind, and how the individual "cells" of the fruit are self contained, and not very adhesive to each other - in other words, how the fruit appears "dry" - but is actually quite juicy inside. 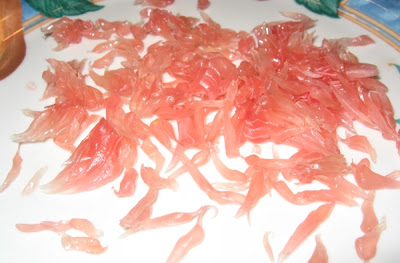 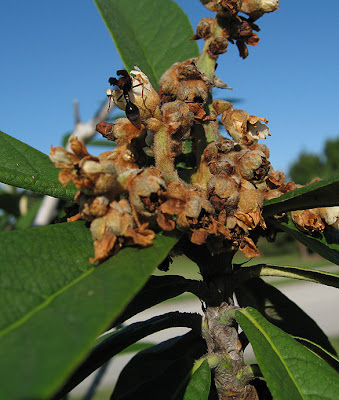 The loquat is one of my dependable fruit - I can count on it every year, even when we sometimes get a freeze or two. This is strange, because the flowers just start to bloom here in Florida around the beginning of December, as the photo shows above.
Indigenous to China, the loquat is a "subtropical" plant. http://www.cfrg.org states that established trees can tolerate a low temperature of 12° F.
My first introduction to the fruit occured in Italy. I was surprised to learn that "Nespola" (as they are referred to in Italy), are grown in Spain, Israel, Japan, and even Brazil.
side note: I have found, however, that many Italians use the word nespola for the Royal Medlar, Mespilus germanica, which is a completely different fruit, not a loquat. look here: http://www.albanesi.it/Alimentazione/cibi/nespola.htm for a photo of a Royal Medlar, but incorrectly stating that it is Eriobotrya japonica. Loquats are orange, not brown (unless rotting).
As shown in today's blog photo, the lowers are white and small. Unfortunately for you, you'll miss their sweet fragrance. The fruit are orange, and can vary from oval to round 1 to 2 inches long. Inside are shiny brown seeds, about 4 or 5 per fruit. Eaten too early, the tangy flesh is almost acidy. When ripe, the flesh can be anywhere from white to yellow to orange.
An excellent description of the different cultivars of loquats can be found here: http://www.crfg.org/pubs/ff/loquat.html
A PDF discussing the loquat's use as an ornamental tree in the FL landscape is available here: http://edis.ifas.ufl.edu/pdffiles/MG/MG05000.pdf
Posted by KZ at 12:55 PM No comments: 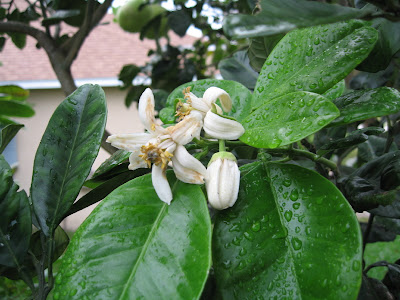 As I head out to work this morning, I was reminded of the time of year - not by a chill in the air, but by the sweet perfume of the Pummelo tree, whose blossoms resemble (in both smell and appearance) any other citrus'. The thing which makes these different is the size - I believe the pummelo is the largest citrus fruit. 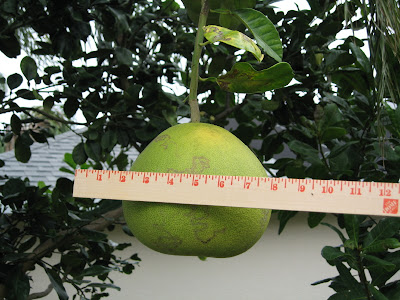 This one is 6" in diameter, and the inside is pink, like a grapefruit. Unlike a grapefruit, the inside of this variety of pummelo is quite dry, if you can imagine that As it ripens , I'll open one up and take some more photos and add it to the blog. 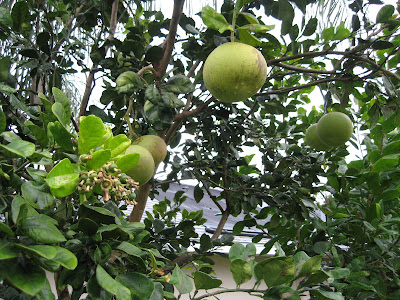 Strangely, this tree blossomed twice - once a few months ago, and again now - the normal November / December blossoms. Note the small fruits alongside the larger ones from last year. 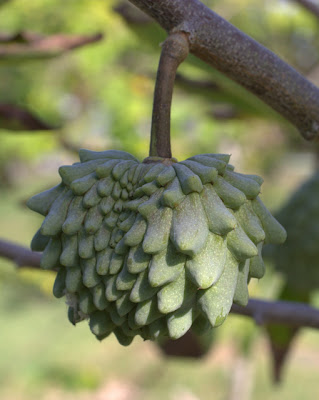 This week, several varieties of my atemoya are almost ready for picking. I should point out that the one in this photo is not, however.

Since the atemoya is a cross between the sugar apple (Annona squamosa) and the cherimoya (Annona cherimola), there are many varieties out there - some with dominant traits from the annona, others from the cherimoya, and still others somewhere inbetween.

While the first hybrid was performed in the United States (Miami) in 1908, atemoya varieties were being hybrid in other countries such as Australia, South Africa, and Israel - where the Geffner variety shown in my top photo was introduced. 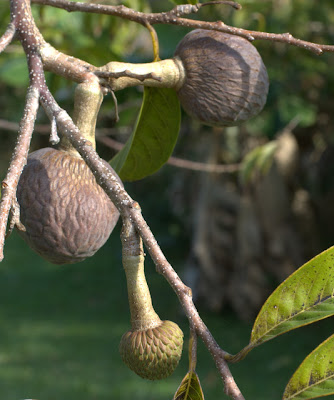 with black seeds - which are toxic. I like the fruit by itself, but have enjoyed a few in milkshakes / refrescos - just remember to remove the seeds before blending!

Just for comparison, look at this other variety of Atemoya.
Notice how the color, shape, and even the thickness of the stem differ from the first photo. I have four varieties, since each contributes its own unique flavor, and ripen at different times of the year.


For more information on atemoya, please visit http://edis.ifas.ufl.edu/pdffiles/MG/MG33200.pdf
Posted by KZ at 7:57 AM 1 comment: 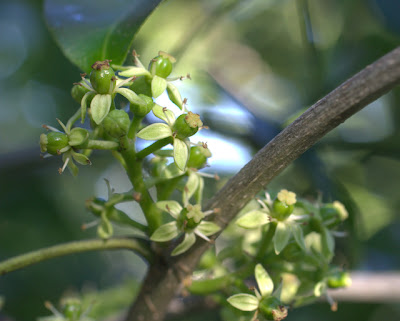 This week is the first time I have witnessed this tree blossom. What I have observed is that only the lower branches have flowers. Perhaps this has something to do with the fact that they are protected from the hot sun by the branches/leaves above them.

The White Sapote is native from Mexico to Costa Rica, where I first tasted one. The skin is not edible, but the pulp inside is, and tastes a bit like peach, but with more of a custardy texture.

A nice PDF File with more information about the White Sapote can be downloaded here:
http://edis.ifas.ufl.edu/pdffiles/HE/HE63200.pdf
Posted by KZ at 6:54 AM No comments:

Welcome to my Blog 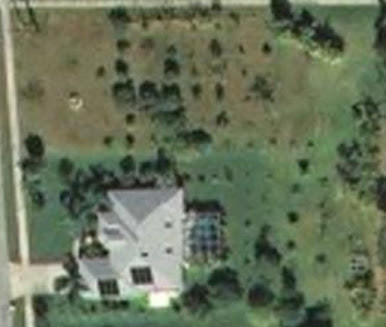 My intent is to create a photo-journal of the changes my collection of rare fruit trees go through during the year.

Being in Central Florida, I'm still amazed on how the seasons (or lack thereof) affect the growth, propagation, and fruiting of these fruit trees. Along with each post, you will find background information on the tree species and external links, when available.

For my first post, I thought it would be a good idea to look from above over the lot where these trees are located. We'll be looking at them from slightly different (and closer) views in the upcoming posts.