The Wikipedia entry says that virtually every part of the coconut palm has some human use.

Sine this is my first tree (it took 10 years to bear fruit), I am not sure about when to pick them. The fruits are quite large, but still green. I imagine they are holding somewhere around 0.5 to 0.75 liters of water inside.

IMG_5130
Originally uploaded by z_kevino
In the last week of May, the inga are developing nicely. The fruit is no more than 1.5 inches in length, barely 1/4 inch in diameter.
The tree is still loaded with flowers.
Posted by KZ at 7:56 PM No comments:

Cashews are getting bigger!

IMG_5035
Originally uploaded by z_kevino.
this is what they look like in the 3rd week of May. Unseen here, are the loads of new flowers, with their fragrant, almost cinnamon smell.
Posted by KZ at 7:58 PM No comments:

IMG_5033
Originally uploaded by z_kevino.
The Longan tree is also starting to set fruit
Posted by KZ at 10:13 PM No comments:

IMG_5008
Originally uploaded by z_kevino.
The persimmon tree is starting to fruit. This little bug is hiding in the crevices of the flower petals
Posted by KZ at 10:12 PM No comments:

Up the skirt of a Sugar apple

IMG_5001
Originally uploaded by z_kevino.
This is the view an insect gets.
Posted by KZ at 10:10 PM No comments:

This strange variety of atemoya is still ripening on the tree. While the size and color is eye candy, the flavor of this particular cultivar does nothing special for me.

Can anyone identify it?

update: This is a custard apple, and not atemoya

IMG_4920
Originally uploaded by z_kevino.
Also known as the Chocolate Pudding Fruit, the black sapote is one of my favorite fruits. Surprisingly enough, this tree is 6 years old, always flowers, but never sets fruit. Let's see how it does this year.
If it fruits, I'll write an entry about the fruit.

This tree has flowers which have both male and female organs, and others which are solely male. I assume this photo shows both types.
Posted by KZ at 11:05 AM 3 comments:

IMG_4903
Originally uploaded by z_kevino.
These Mauritius Litchies are doing two things: getting plump, and changing color. Last year, they were ready for harvesting around the end of June. I suspect this year they will be a bit earlier, due to the mild Winter we had.
Posted by KZ at 5:59 PM No comments:

IMG_4901
Originally uploaded by z_kevino.
I'd sure love to know why this happens!
Half of the Mangoes fell due to high winds. I can not afford to lose more to splitting!
anyone have ideas on how to prevent this?
Posted by KZ at 5:56 PM 1 comment:

this week's flowers - first week May

This week the black pepper (Piper nigrum) continues to develop nicely. I'm waiting for one or two berries at the base to turn red, which I've read is when you harvest them and prepare for drying. 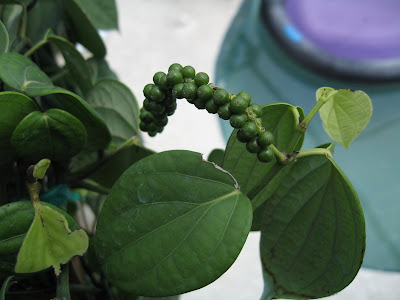 The blackberries are in bloom this week as well. Here, you can see both flower, and under it, developing fruit. (note: however hard I've tried, I'm unable to check email on this variety of BB) 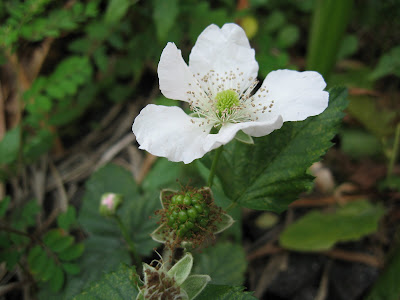 It's almost Litchi time! Here is a close up of the developing fruit. I estimate about another 5-6 weeks until harvest. 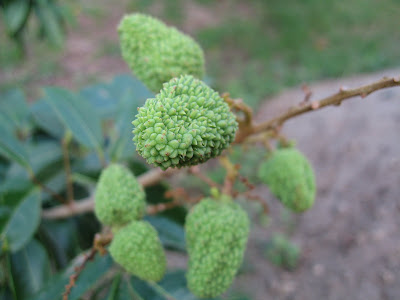 Native from Iran to Northern India, I find it a bit strange that people refer to these as Chinese Apples (well, at least they did in the 1970's, when I first was introduced to them). According to a wikipedia entry , The name "pomegranate" is derived from Latin pomum ("apple") and granatus ("seeded"). If you've ever cut one open, you'll know why. But be careful - Pomegranate juice permanently stains!

Enjoy these photos I took today. If you click on them, the full size image should be displayed, and you can see more detail. 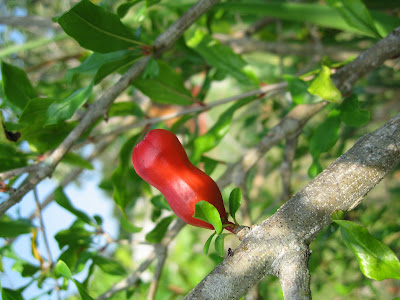 These photos show the various stages of the flower/fruit development. The first one shows a flower before it "opens up." 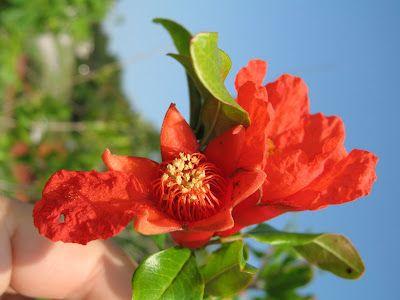 No more than a few days later, the flower will burst open, as shown here - it's ready for pollination. (If you click/zoom in, you can see the yellow pollen contrasted against the red petals.) 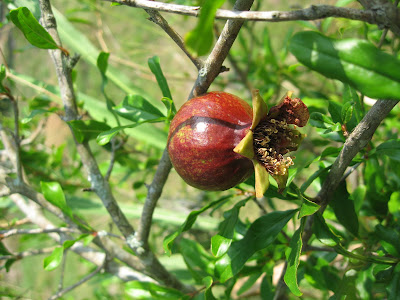 Above is the result you hope for: a developing pomegranate fruit, somewhere near a week old.

Even in Florida, where the Winter was quite warm this year, my pomegranate still lost its leaves (it is deciduous). I have a white variety, but it is quite young still. My friends at the Tampa Bay Chapter of Rare Fruit Council International made it for me from a clipping a few years back. It seems to be a slow grower (for me, anyway).

Well, that's all on the pomegranate until I can harvest some fruit. But before I save this post, I want to share one interesting thing I ran across when researching this fruit: There was an statistical analysis done on just how many seeds a pomegranate has. In their analysis, there was on average 613 seeds per fruit, which is (coincidentially) why Jewish tradition teaches the pomegranate is a symbol for righteousness - it is said to have 613 seeds corresponding with the 613 mitzvot, or commandments of the Torah. (amazing what a little About.com can teach you)